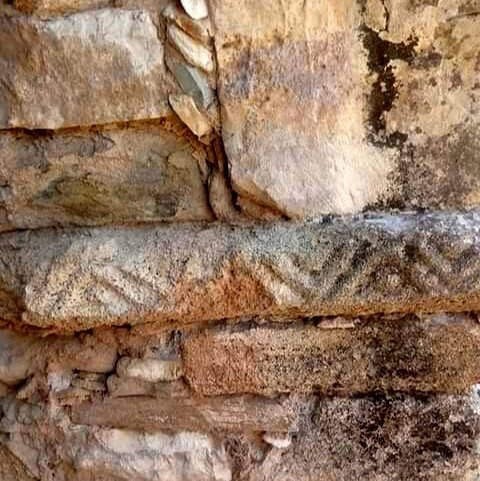 I do not believe in superficial celebrations. I believe in honouring the value of things and beings. And today, being the international day of women, I wish to honour the value of the feminine traits in us, traits in both women and men, traits which were suppressed, silenced, wounded, buried…

On a hot day, we began a journey to find the old monastery. The dirt road was bumpy and the sun was burning. The landscape was lunar; a vast area of empty hills, dead grass, scarce bushes. In the distance you could see a hugely wide, stony dry riverbed. One would say life almost abandoned this place.

I opened my mouth and let the voice to come out. I was surely in a duet. Something from the depth was singing and I was responding repeatedly. In the midst of this song, I softened my heart and surrendered my body to the motion and the emotion.

Few minutes later, in between the stones on the walls of the monastery, we found the tangible proof. A symbol of an ancient Aphrodite’s temple stuck in between the other stones. A sign that here, a temple of the Goddess was once standing with pride, reminding humans of their feminine capacity to bring life, to love deeply, to savor pleasure, to put boundaries, to be wild, to hold the others, to listen from the heart, to express, to see the unseen, to heal. Now the old temple is silenced, disassembled and buried under the Monastery.

But here’s the truth; What is buried is not dead. It is not dead, even if it is buried for a thousand years. Instead, it is fully alive and it is awaiting for us. The feminine traits of us, whether they are suppressed, silenced, wounded, or buried, they are not dead. They are calling us from the depth, to unearth them and reclaim them.

Today I am honouring the feminine traits in us, women and men. What are you honoring?