This is it. It’s the darkest hour. The scariest of our fears. It’s when the danger becomes real.

In the narrative of “The Hero’s Journey“, there is a moment when all the testing and training is over, and things become serious, very serious. This stage was also called by Joseph Campbell “The Ordeal“, an old English term that etymologically means “judgement”, or “that which is dealt out” (by the gods, or fate).

That’s because this is the first time when the characters encounter real danger, including the possibility of physical harm or death, and only by proving their worth they can progress in their journey. For the first time here, real failure is a possibility. Once the cave is entered, there is no turning back. But that’s exactly the point, because without fear, there is no challenge. And without it, there will be no real learning experience.

That’s the main philosophy behind this stage of the Journey. 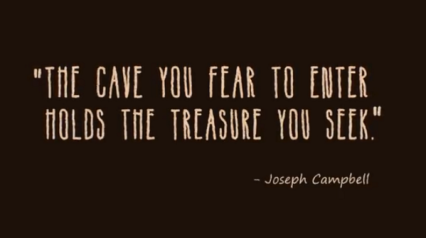 It is a very complex stage, dealing with our deepest fears, weaknesses, with our demons – and possibly with having to look into our most intimate soul. It’s a moment of truth, when all the preparation and the training is defined by success – or not – in a decisive test. It’s also the situation in which the Hero, probably for the first time, starts believing in him / herself. And all this would not be possible without the fear and the self-doubt of the approaching phase. Because ultimately, in the Dark Cave we don’t really defeat a dragon or some ghost, but we defeat our own limits – to overcome them, and open to a new stage of existence. In the stories, this moment is usually represented as a real “cave”. A dark, mysterious, hostile place. Probably inhabited by strange and dangerous creatures.

Star Wars will be again our first example. When he is captured by the Death Star, the young Luke Skywalker has just begun his training as a Jedi and is not ready to face Darth Vader in a duel. That part will be taken by Obi-Wan Kenobi. Instead, he and his companions sneak through a maze of corridors, looking for the cell where the Princess Leia Organa is held captive. Using a combination of deceit, wits and fighting skills, they manage to find her, only to face a bigger problem: how to escape?

And that’s how they end up in a “garbage compactor“. That’s literally our Dark Cave. A small, claustrophobic room full with litter, stinky, and probably populated by some other creature?

Luke: “There’s something alive in here!”

When the walls start to move to terminally compress the garbage (and our heroes), Luke for the first time faces the possibility of a premature and very definitive end for his quest. It will be only with the help of his droid friends, who hack the base computers, that he will be able to make it out alive. And later in the saga, Luke is completing his training as a Jedi with Master Yoda and has only one test to pass: to enter a “dark cave” (really? really!) on planet Dagobah. He claims that he is not afraid, but the wise master knows better, and warns him: As Luke will have to find out, the scariest enemy to defeat in the cave is not the Dark Knight, but… only himself.

Skywalker’s face into Darth Vader’s mask. Quite the prophetic sight.

In many mythologies, the Ordeal is represented by a Dragon (which may or may not live in a… cave).

It’s easy to understand why: a monstrous creature, giant reptile (commonly associated to greed, deceipt, poison), able of great destruction. Their skin is protected by tough scales, hard to penetrate (symbolising the difficulty of the challenge). It’s able to inspire fear, and can (according to different traditions) kill with just one poisonous bite, or with its fiery breath.

It’s interesting how this archetype is present in so many different cultures. It’s probably an element of proto Indo-European religion, from which it spread to Greece and Caucasus (and later, Europe including Scandinavia and Britain) and to China. A snake tempted Adam and Eve, causing their fall from Eden. Poor reptiles, such a bad reputation.

In the German / Norse tradition, one famous dragon is Fafnir. Originally a powerful and proud Dwarf (or Giant), son of gods himself, Fafnir was corrupted by his greed for treasure, and turned into a poisonous giant dragon.  The hero Sigurd will kill him using a combination of might and intelligence, and following the advice of the god Odin. We will discuss extensively The Reward in the next chapter of our story; however, after slaying the dragon, Sigurd will drink his blood and become able to understand the language of the birds; will recover the legendary Ring of Nibelungs; and will also meet Brunhild (after crossing a fire wall, another universal symbol for a challenge), but that’s another story, and we will tell it another time. 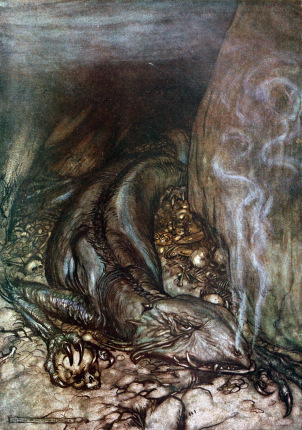 It is clear how this story is mirrored in “The Hobbit“, by J.R.R. Tolkien – and the following cinematographic version by Peter Jackson: once again we have a Dragon guarding a fabulous treasure, a powerful magic Ring, and an unlikely hero who manages to do it all, even if with just a little bit of supernatural help.Not only the Dragon, but also Gollum have many traits in common with the original Fafnir from Nordic legends.

In modern popular culture, Fafnir has had a very long life, and he far from being forgotten.

FAFNIR will strike soon! Who can save us? But of course…

Of course Odin will send his son Thor to defeat him! Thor and Fafnir didn’t have an opportunity to meet, according to the original tradition. It’s interesting that “WARUM” in Germans means: “Why?”

And the same story continues to live through all the media: in “Django Unchained” (2012) the dentist / mentor / bounty hunter Doctor Schultz tells the story of how Siegfried rescued his Brunhilde, killing the dragon. A very attentive Django listens to him, while they are sitting around the fire.

The reference is actually made obvious by same Tarantino, when he makes Doctor Schultz say: “When a German meets a real-life Siegfried, it’s kind of a big deal”.

In the Japanese mythology, Yamata no Orochi is the legendary dragon with 8 heads and 8 tails that is defeated by Susanoo, the god of thunder.

Yamata defeated by Susanoo – God of thunder, just like Thor? Mmmmm now this cannot be a coincidence, can it? He is described as “an eight-forked head and an eight-forked tail; its eyes were red, like the winter-cherry; and on its back firs and cypresses were growing. As it crawled it extended over a space of eight hills and eight valleysAfter killing him”. That’s as big as it gets. Yes, the seed was planted for the later Godzilla.

However, by killing the dragon, from the spike of the 4th tail the legendary sword Kusanagi was forged. The legendary sword is still revered as one of the three Imperial Regalia of Japan. A mirror, for Wisdom. A jewel, for Benevolence. A sword, for Valor. Their current location or existance is unknown.

And a famous dragon is also found in an early Christian tradition. Such a monster was terrorising the city of Silene in Lybia, when the valorous Cappadocian knight George rode by. He decided to take the quest to kill the beast. And so he did, breaking his own lance against the creature’s hard scales, and ultimately finishing it off with a blow of his magic sword Ascalon. He also rescued a princess, but the Christian chronicles don’t say much about what happened between them – George was destined to become a Saint, after all.

Another version of the story reports that St. George only tamed the Dragon, without killing it. He brought it back to the city, where people were (rightfully) terrified by its approach. The valiant George called out to them, saying that if they consented to become Christians and be baptised, he would slay the dragon before them. The king and the people of Silene accepted: 15 thousand people were converted, George became saint, and the dragon was finally slain. Ahem… quite controversial, talking about the use of weapons of mass destruction to spread religion. But anyway. 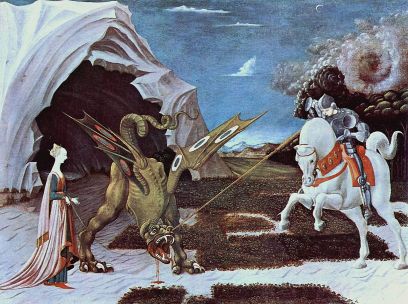 The story has had a tremendous impact and continues to echo on Western culture. It originated from the early Christian kingdoms of the area of Caucasus, but it spread to Europe and became one of the most popular traditions in the Age of Chivalry, helped by the spread of Christianity due to the Crusades (and the strong need for good propaganda stories that came with them). Many artists gave their interpretation of the story, including Raphael and Dalì.Salvador Dalì’s vision of the legend (1971) Saint George is still nowadays the national hero and Saint of Georgia, which goes by his name (the one in Caucasus, not America), and also bears the emblem of the battle in its national coat of arms, 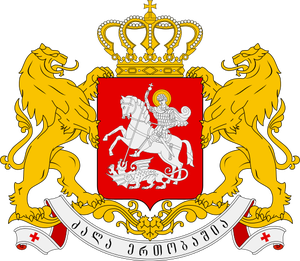 Saint George’s cross (red cross on white field) is also the symbol on the English flag, and Winston Churchill wanted to name Ascalon his personal airplane during world war II.

The model Avro 685 York remained in active service until 1957.

Saint George’s Day (23rd of April) is celebrated as Christian religious holiday in many countries in the world, including Russia, Canada, England, Spain. So – what is the importance of entering the dark cave, and if necessary, finding and killing the beast that lurks within?

Clearly, it’s an universal story of challenging our own limits and fears, and by doing it, getting stronger and wiser. All the stories include – after overcoming the Ordeal – a Reward of some kind. This is the fundamental lesson to be learnt by this stage: without challenge, without fear (even), there can be no gain. Experience comes when we stretch our comfort zone, often to the point where it starts to hurt. We are naturally afraid of what we don’t know, of what seems beyond our capacities. The stories of so many legendary heroes and gods are there to tell us exactly this: to be afraid of a test is not cowardice: it’s basically human. But what makes us better, close to Gods, is when we find the necessary inspiration and defeat our “enemies”. The “Enthusiasm” that comes after an achievement? From Greek, “enthusiasm” means literally “to receive God inside”. We get closer to Divinity when we do our best, and we deserve to celebrate.

In conclusion: two are the main elements to remember from “The Dark Cave”.

If this is not happening – we are defeating the purpose of education, again. And this might explain why so many (young) people, not finding their own life and career satisfying enough, start looking for rewards in the wrong places: alcohol, binging, gambling, drug abuse, etc. In other words, a society based on Achievements without (the deserved) Celebrations brings as a consequence a lot of empty Celebration, without any particular Achievement to give it a meaning.

Thank you for being with us! Next chapter will be all dedicated to Celebration and Rewards! Stay with us!